An Introduction to Texas-style Barbecue 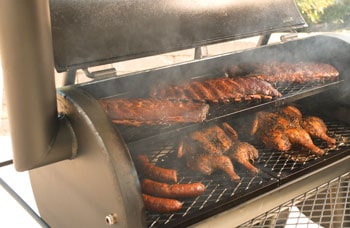 In Texas, barbecue isn’t just good food, it’s part of the cultural identity. Back before Texas was even Texas, versions of the popular barbecue we now associate with the state was already being introduced.

Because of Texas’ storied past and rich history, barbecue in Texas isn’t just done one way. In fact, each region of Texas has its own, unique way of doing barbecue. However, when you hear someone talk about Texas-style barbecue, they’re actually referring to Central Texas-style barbecue.

What is Central Texas Barbecue?

In the south, they have barbacoa. In the east, they have chopped beef. In the west, they grill right over direct heat. But in Central Texas, you’re cooking low and slow in a Texas smoker pit or barbecue pit, which uses low, indirect heat to cook meat over several hours. This creates the flavorful, tender meat that many people associate when we talk about Texas barbecue.

Beef is What’s to Eat

While you can cook just about anything on a smoker, when we’re talking about true Texas barbecue, we’re talking about beef. Texans have a preference for the flavor and texture of beef that spills over into a kind of reverence. This could be connected to the fact that Texas’ cattle industry is a huge part of the state’s identity and past.

Brisket—the chest muscle—is the king of barbecue—and it has two distinct portions: the leaner “flat” and the fatty “point”. On menus for Texas barbecue, you’re likely to see both types listed, but even if they’re not, barbecue joints will cut from whatever side of the meat you prefer. Not sure which that would be? The “point” is moister and loaded with rich flavor, while the “flat” is leaner with a small cut of fat cap.

Any self-respecting Texas barbecue joint serves a combo plate, but the combo plate is never complete without brisket. A combo plate could have pork ribs, turkey, beef ribs, sausage, pulled pork, or some combo of the above. However, the taste and cook of the brisket is the real signifier of a barbecue pit master’s skill.

A convenient way to get everything in your inbox.

REGISTER YOUR SMOKER OR GRILL